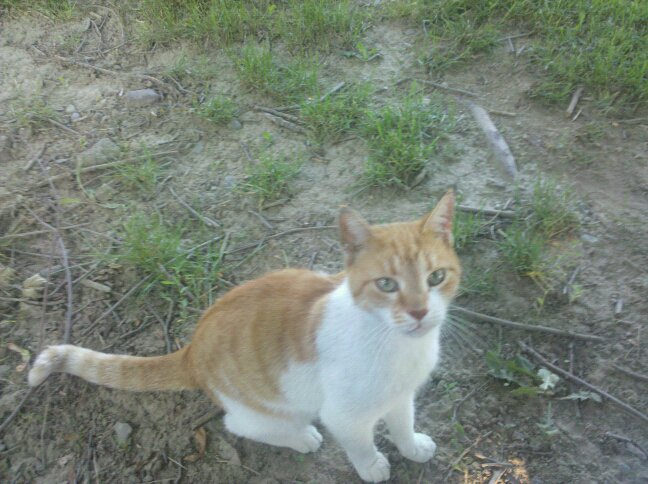 How One Cat Ruled His World – A Short Story

There was a reason he was afraid of his own shadow. You see, Scooter was an indoor cat. And now, he found himself in the shadows just outside the walls of his home. But before I get too far let me try to explain. Scooter was a 9-year-old orange and white house cat who at a very early age was given the opportunity of a lifetime.

It didn’t take long for him to take over the role. He truly ruled his kingdom. His daily routine included checking each entryway into and out of Scooterville. The windows were sealed tight, the doors locked shut. No one in or out without his permission. Scooter spent his morning basking in the sun where he’d gloriously watch the peasants along the outskirts pilfering for nuts or desperately seeking straw for their shelters. All the while King Scooter afforded himself a daily feast and several baths each day. He never had a need to leave – his realm included exercise equipment in the forms of several sized round things, a few old pen tops, and a scratching post where he kept his weapons sharpened. He trained for battle each and every day, knowing he’d never need to actually carry out such a task. The citizens of Scooterville placed stuffed, would-be enemies throughout. And Scooter, the ever-ready warrior, took to them without fear. Mercilessly clawing and grappling them into submission where his back legs eliminated any threat to his throne. All was well. until that fateful day.

The citizens of Scooterville took their weekly trek out into the unknown for the necessities and their offerings to King Scooter. Treats were given and expected. After all, he allowed them to slumber under him for comfort. His favorite always came from the canned tuna. Once the can popped open, Scooter was the first to enjoy the spoils. He always thought it was a small price to pay for peace and freedom. But something was different this day, he could feel a cool breeze flowing through the walls of his kingdom. As he canvased each door and window, as he regularly did after any of the citizens left, he found a perimeter breach – or so he thought. There in the room that housed his personal porcelain fountain, a window was open. Was it done accidentally? Had the citizens purposely done this to allow the scoundrels to overthrow the kingdom and oust the dear king? No time was wasted, he couldn’t be too sure of either scenario.

King Scooter cascaded himself up the wall to the open window. There, he saw a wide-open field, bare of any peasants. Where had they gone? Had they made their way in? King Scooter refused to lay in waiting to be attacked in his own kingdom. He lept to the bush just down from the window. He was cautious, as this was the first time he was outside the walls of his fortress. He crept along its base when a strong wind blew and Scooter thought his fate was sealed as he felt the sharpness touch his back. He jumped nearly out of his skin. He turned to attack but all that appeared was a dry leaf that hung from the dead branch of the bush he used for his descent.

As Scooter made his way around, he saw the beauty that surrounded his kingdom. It wasn’t the wasteland he thought it was. The peasants weren’t peasants at all – they were just going about their day as he did. He wondered who was truly free, him or them. As he sat along the back porch overlooking the crystal blue lake, that smelled an awful lot like chlorine, he was still able to bask in the sun and enjoy his views. It was then King Scooter saw what truly was taking place outside his castle. The hard work that was being put in. He saw the bird’s nests that had been built by those gathering straw. He saw the nuts that had been accumulated actually being enjoyed. He watched as those he had so desperately wanted to keep out didn’t seem to mind him being in their world. They simply were content to let Scooter share it with them.

As the citizens of Scooterville returned, they noticed Scooter resting peacefully on the outdoor throne and of course rushed to him to see if he was alright – he was. Scooter was more than alright, he was finally enjoying the entirety of his kingdom. They scooped him up and took him inside, where he was immediately drenched with pets, close-up kissy faces, and the opening of treats. To this day King Scooter still reigns over his kingdom but he no longer looks down upon those who make their lives outside its walls. Instead, he takes every chance possible to wander out to enjoy it with them.

If you are a writer or reader and would like to join a Facebook group geared towards writing, different aspects of indie writing, and discovering new writers – check out The Writer’s Offering.